First of all i started analysing the Drone’s presumed movement patterns from the concepts, made by Elsa Varland. The detected and undetected states, where important features to implement in the rig, since it would make it easier for the animator to toggle between them. 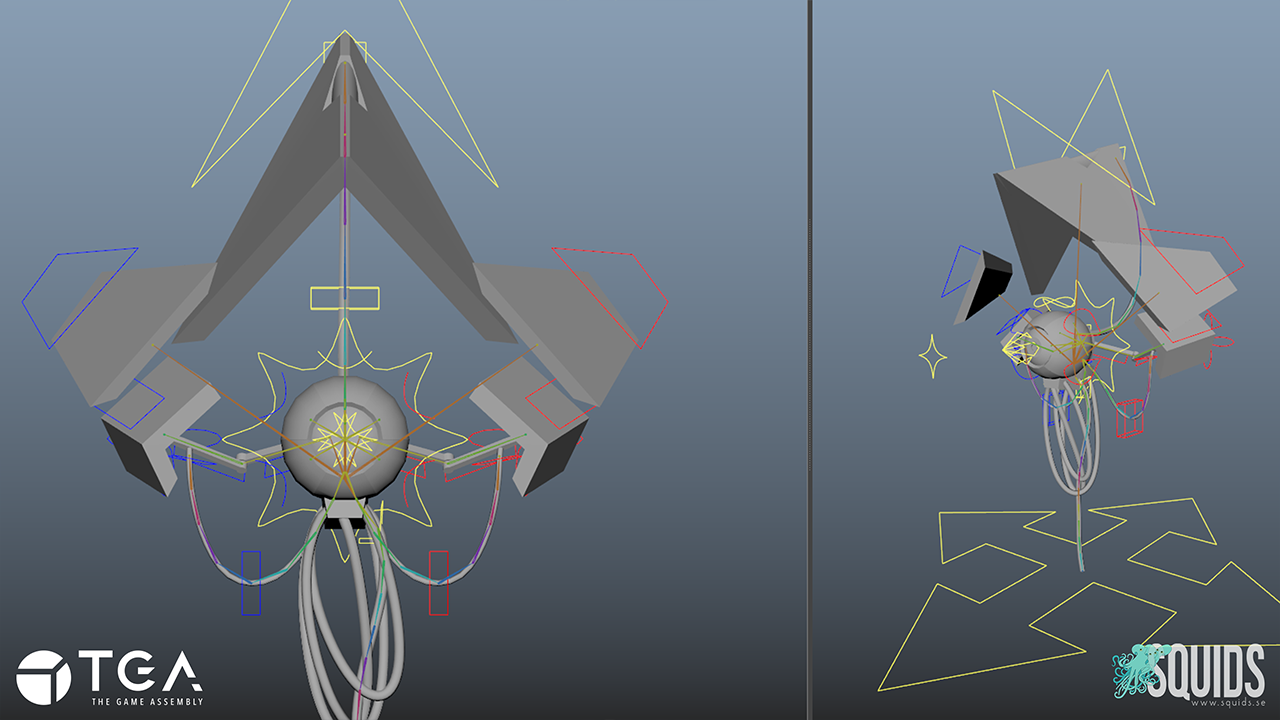 The natural decision was to rig the Drone in the unfolded (detected) state, where the character was going to be more active and where all functionalities should be accessible to the animator. Hence the Drone’s more active animations would be executed in this state. It seemed natural to break down the rigging process into smaller tasks and focusing on different “body parts” independently, but still being aware of the abilities of the rig as a whole.

Arms, wings and panels had to fit perfectly underneath and inside the character's "hat" (roof). Therefore, in order to facilitate for the animator, I needed to construct a system, where the cables and the wings would match exactly when the "arms" were folded and unfolded. This was neatly prepared for me by the graphic artist Ludvig Ribbnäs.

My idea was to make a fully functional ik/fk-switch for the wings in the unfolded (detected) state and an attribute to fold them back to the undetected (folded) state. This attribute was made with colorblend nodes. 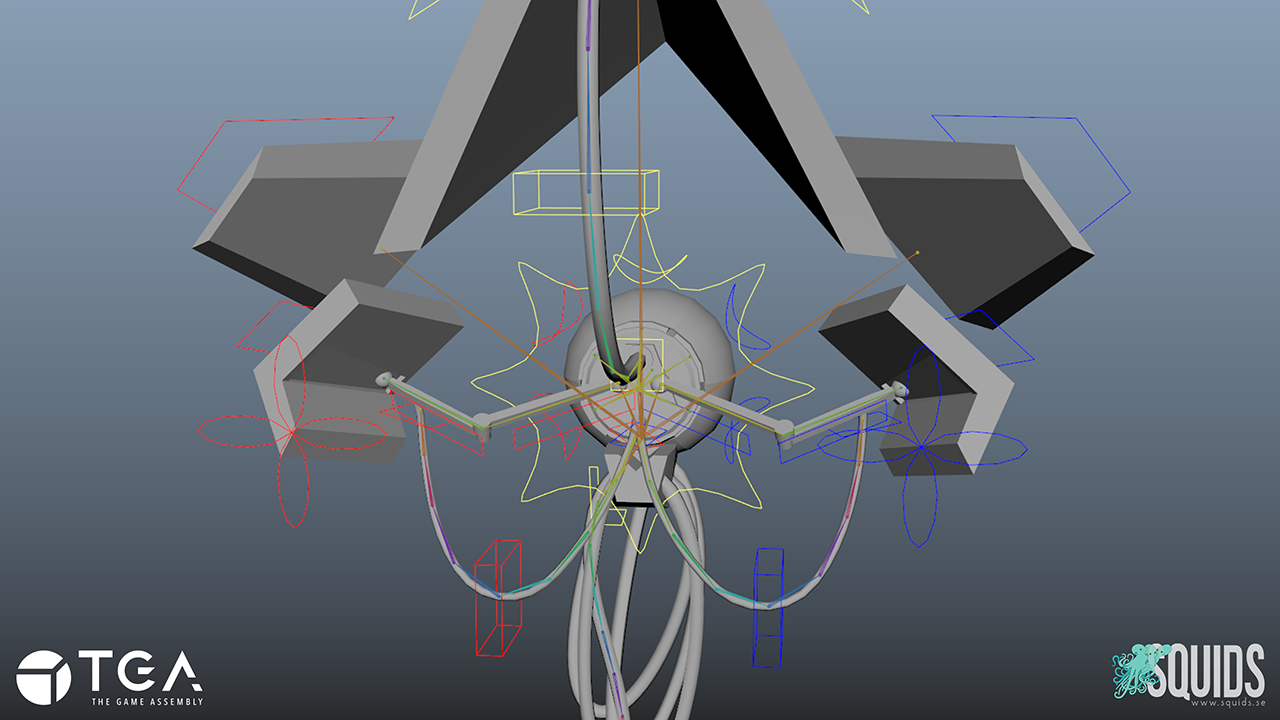 The panels and the roof itself had certain positions in the fold state too, and at the same time they needed to be able to move freely in the other state. Two locators that hold information of where these body parts belong in the two states, also connected to fold attributes with parent constraints. 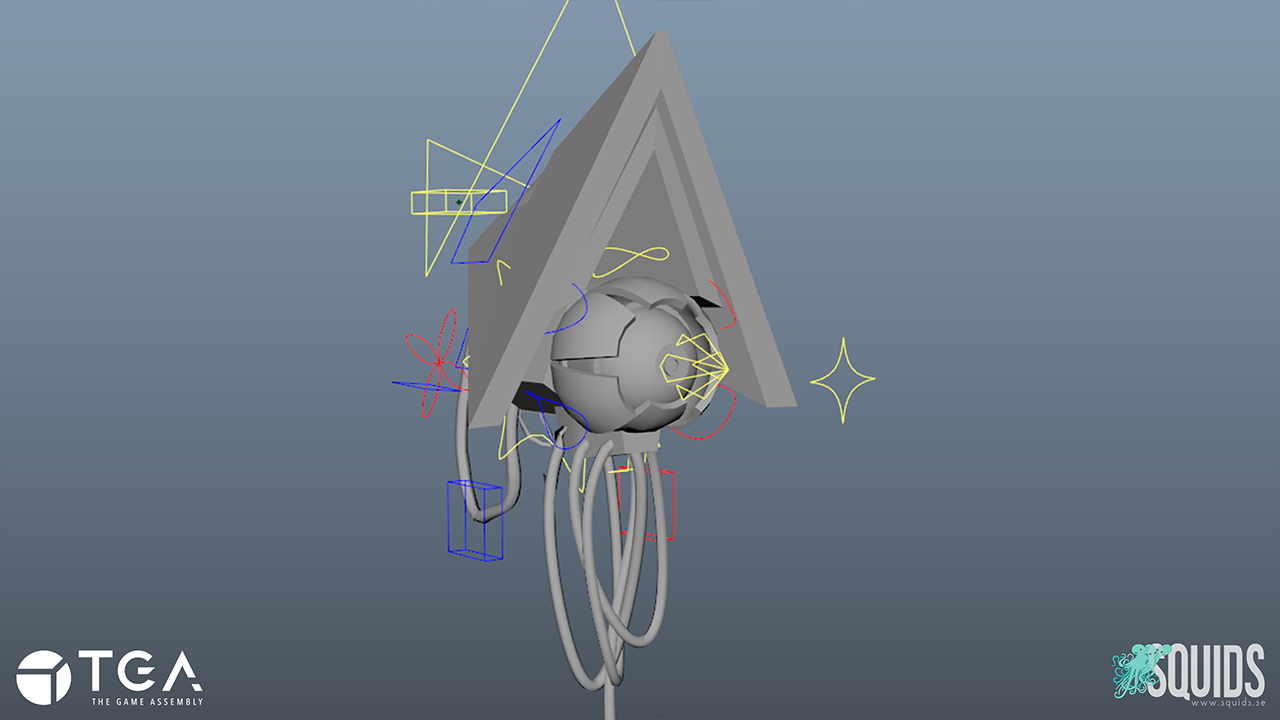 The cables where the biggest challenge, since i had to test different solutions depending on the stability of the rig. My first try was ik-splines, which seemed more iterative working with, but a lot more unstable. I ended up using a set up with two ribbon spines for each cable with blendshapes. The animator has the posibility to modify the cables manually too with controls for the ribbon. The cable tail needed in my opinion a bit of a twinge, so I decided to set up a little script with a calculation in the expression editor an automated function of the tail. Together with an ik-spline it got all the flexibility, that Timothy Karlsson needed to do the excellent animations. Timothy also made the cube map that is shown in the background.